Overview
The throat (see the image below) is part of both the digestive and respiratory systems and is responsible for coordinating the functions of breathing and swallowing. From superior to inferior, the throat is subdivided into 3 sections: oropharynx, hypopharynx, and larynx. Toget

The throat (see the image below) is part of both the digestive and respiratory systems and is responsible for coordinating the functions of breathing and swallowing. From superior to inferior, the throat is subdivided into 3 sections: oropharynx, hypopharynx, and larynx. Together, the oropharynx, hypopharynx, and larynx function to sense and propel a food bolus from the mouth to the esophagus in a coordinated fashion while protecting the airway. 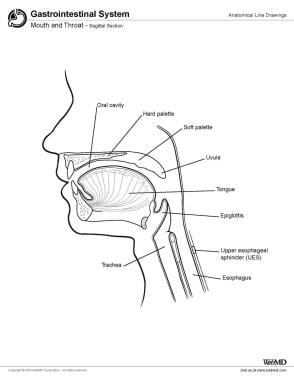 The pharynx is bounded by the base of the skull superiorly; the cricoid cartilage inferiorly; and the nasal cavities, the oropharyngeal inlet, and the base of the tongue anteriorly.

Within the lateral walls of the oropharynx are the paired palatine tonsils, sitting in a fossa separated anteriorly by the palatoglossal folds and posteriorly by the palatopharyngeal folds. The tonsils are masses of lymphoid tissue that are involved in the local immune response to oral pathogens.

The borders of the hypopharynx are the hyoid bone superiorly and the upper esophageal sphincter (UES), or cricopharyngeus muscle, inferiorly.

The posterior pharyngeal wall consists of the middle and inferior constrictors and their overlying mucous membranes. Below this, at the level of the cricoid cartilage, the circumferential cricopharyngeus muscle forms the UES. This muscle tonically contracts during rest and relaxes during swallowing in order to allow a food bolus to pass into the esophagus. 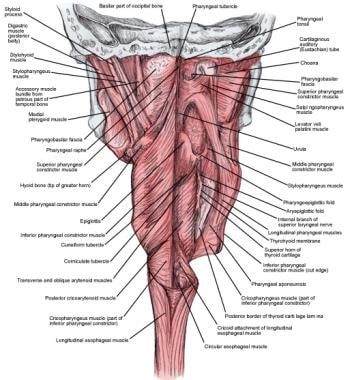 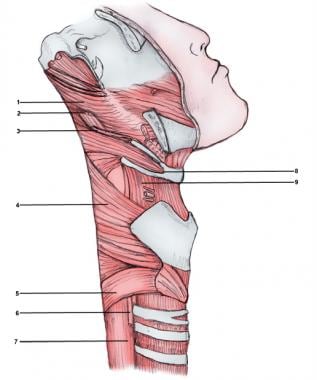 The stylopharyngeus originates on the styloid process and inserts into the posterior border of the thyroid cartilage. It is the only muscle of the pharynx innervated by the glossopharyngeal nerve.

Blood drains from the pharynx via an internal submucosal plexus and an external pharyngeal plexus contained in the outermost buccopharyngeal fascia. The plexus drains into the internal jugular vein and, occasionally, the anterior facial vein. Extensive communication exists between the veins that drain the throat and those that drain the tongue, esophagus, and larynx.

The pharyngeal plexus of nerves provides the efferent and afferent nerve supply of the pharynx and is formed by branches of the glossopharyngeal nerve (cranial nerve IX), thevagus nerve(cranial nerve X), and sympathetic fibers from the cervical chain. Other than the stylopharyngeus, which is innervated by the glossopharyngeal nerve, all of the muscles of the pharynx are innervated by the vagus nerve.

The pharyngeal plexus receives branches of the glossopharyngeal and vagus nerves to supply sensory innervation to the pharynx as well. The posterior one third of the tongue, in the oropharynx, receives both its taste and somatic sensation from the glossopharyngeal nerve. The cricopharyngeus (UES) receives its parasympathetic input for relaxation from the vagus nerve and its sympathetic input for contraction from postganglionic fibers from the superior cervical ganglion.

The pharyngeal wall layers, from superficial to deep, are as follows:

The mucous membranes of the oropharynx and hypopharynx consist of nonkeratinizing stratified squamous epithelium. Deep to this is an elastic lamina propria; this layer separates the mucous membrane from the fibrous pharyngobasilar fascia, which is thickest superiorly at the level of its attachment with the skull base and thins as it descends to cover the constrictor muscles.

The muscles of the pharynx include an inner longitudinal layer and an outer circular layer (see Gross Anatomy). The outermost buccopharyngeal fascia is a thin, fibrous layer containing the pharyngeal plexus of nerves and veins. Its attachments are the prevertebral fascia posteriorly and the styloid process and carotid sheath laterally.

AZenker diverticulumforms from increased pressure within the lumen of the pharynx, usually as a result of uncoordinated peristalsis and cricopharyngeal hyperactivity. It most commonly occurs during the seventh and eighth decade of life and is far more common in males than females. Its most common presenting symptom is dysphagia, but it may also manifest with regurgitation, weight loss, aspiration, and cough. The standard treatment for a Zenker diverticulum is acricopharyngeal myotomy.[1]

Large vessel vasculopathy in a patient with systemic lupus erythematosus: a case report

Are you sure you want to delete this tier?

Are you sure you want to delete this address?

You are about to purchase the items, do you want to proceed?