Overview
The tongue is a mass of muscle that is almost completely covered by a mucous membrane. It occupies most of the oral cavity and oropharynx. It is known for its role in taste, but it also assists with mastication (chewing), deglutition (swallowing), articulation (speech), and or

The tongue is a mass of muscle that is almost completely covered by a mucous membrane. It occupies most of the oral cavity and oropharynx. It is known for its role in taste, but it also assists with mastication (chewing), deglutition (swallowing), articulation (speech), and oral cleansing. Five cranial nerves contribute to the complex innervation of this multifunctional organ.

The embryologic origins of the tongue first appear at 4 weeks' gestation.[1]The body of the tongue forms from derivatives of the first branchial arch. This gives rise to 2 lateral lingual swellings and 1 median swelling (known as the tuberculum impar). The lateral lingual swellings slowly grow over the tuberculum impar and merge, forming the anterior two thirds of the tongue. Parts of the second, third, and fourth branchial arches give rise to the base of the tongue. Occipital somites give rise to myoblasts, which form the intrinsic tongue musculature.

From anterior to posterior, the tongue has 3 surfaces: tip, body, and base. The tip is the highly mobile, pointed anterior portion of the tongue. Posterior to the tip lies the body of the tongue, which has dorsal (superior) and ventral (inferior) surfaces (see the image and the video below). 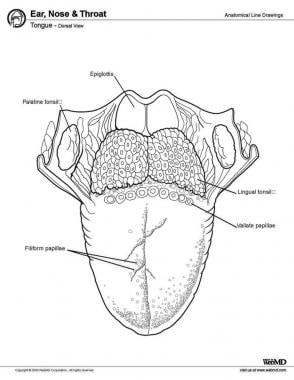 The median sulcus of the tongue separates the body into left and right halves. The terminal sulcus, or groove, is a V-shaped furrow that separates the body from the base of the tongue. At the tip of this sulcus is the foramen cecum, a remnant of the proximal thyroglossal duct. The base of tongue contains the lingual tonsils, the inferiormost portion of Waldeyers ring.

The surface of the body of the tongue derives its characteristic appearance from the presence of lingual papillae, which are projections of lamina propria covered with epithelium.[2]The 4 types of lingual papillae are as follows: vallate (circumvallate), foliate, filiform, and fungiform.

The vallate papillae are flat, prominent papillae that are surrounded by troughs. In humans, there are 8-12 vallate papillae, located directly anterior to the terminal sulcus. The ducts of the lingual glands of von Ebner secrete lingual lipase into the surrounding troughs to begin the process of lipolysis.[3]

Each vallate, foliate, and fungiform papilla contains taste buds (250, 1000, and 1600 taste buds, respectively). Each taste bud is innervated by several nerve fibers. In humans, all taste buds can perceive the 5 different taste qualities: salt, sweet, bitter, acid, and umami. Each taste bud consists of taste receptor, basal, and edge cells. When a taste molecule binds to a taste receptor, the receptor cell depolarizes, causing an influx of Ca++, which results in the release of an unknown neurotransmitter.

Following depolarization, the afferent neural pathway depends on the location of the taste bud that was stimulated. In the anterior two thirds of the tongue, the chorda tympani branch of the facial nerve (cranial nerve VII) is stimulated. The lingual-tonsillar branch of the glossopharyngeal nerve (cranial nerve IX) relays taste information from the posterior third of the tongue.

Taste fibers from the anterior two thirds of the tongue first travel with the lingual nerve and then are relayed to the chorda tympani nerve. This nerve enters the temporal bone from the infratemporal fossa, where it joins thefacial nerveand travels to the geniculate ganglion, where its pseudounipolar cell bodies are located. From the geniculate, taste fibers travel in the nervus intermedius to the nucleus of the solitary tract located in the medulla oblongata.

Similarly, taste fibers from the posterior one third of the tongue travel with the lingual-tonsillar nerve to the inferior glossopharyngeal ganglion and then to the nucleus of the solitary tract. Second-order neurons then project taste fibers to the parabrachial nucleus of the pons. The central tegmental tract carries taste sensation from the pons to the thalamus. The pathway ends in the frontal operculum and insular cortex.

Table 1. Muscles of the Tongue(Open Table in a new window) 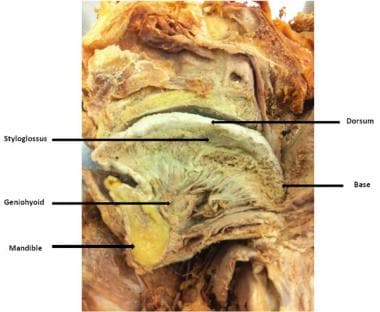 Similar to most of the head and neck region, the tongue derives its arterial blood supply from the external carotid artery. The lingual artery branches off the external carotid artery deep to the stylohyoid muscle. At first, it travels superomedially; after a short distance, it changes direction and moves anteroinferiorly. The hypoglossal nerve (cranial nerve XII) crosses over it laterally before it enters the tongue deep in the hyoglossus muscle.

Motor innervation for all of the muscles of the tongue comes from the hypoglossal nerve--with the exception of the palatoglossus, which is supplied by the pharyngeal plexus (fibers from the cranial root of the spinalaccessory nervecarried by thevagus nerve).

Ankyloglossia (tongue-tie) is caused by an abnormally short lingual frenulum, which can inhibit tongue movement.Macroglossiais a congenital enlargement of the tongue. Microglossia is a small tongue, and aglossia an absent tongue[5]; these are rare and are usually associated with other limb abnormalities.

Geographic tongue(migratory glossitis) is characterized by a benign, asymptomatic bright red patch (or patches) with a gray or white margin on an otherwise normal tongue.[6]Fissured tongue(scrotal tongue) is characterized by numerous small furrows or grooves on the dorsal surface of the tongue.[7]

In black hairy tongue, hyperplasia of filiform papillae leads to bacterial trapping; entrapped pigments and desquamation may lead to the dark discoloration of the tongue (see the image below).[8] 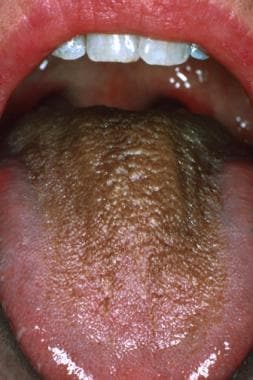 Genetic test for low birth weight on the horizon

Undiagnosed synovial hemangioma of the knee: a case report

Are you sure you want to delete this tier?

Are you sure you want to delete this address?

You are about to purchase the items, do you want to proceed?